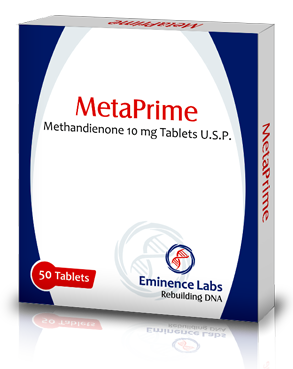 METHANDIENONE binds to and activates the androgen receptor (AR) in order to exert its effects. These include dramatic increases in protein synthesis, glycogenolysis, and muscle strength over a short space of time. Side effects such as gynecomastia, high blood pressure, acne and male pattern baldness may begin to occur. The drug causes severe masculinizing effects in women even at low doses. In addition, it is metabolized into methylestradiol by aromatase. This means that without the administration of aromatase inhibitors such as anastrozole or aminoglutethimide, estrogenic effects like gynecomastia (breast development) may appear over time in men. Many users combat the estrogenic side effects with anastrozole, tamoxifen or clomifene. In addition, as with other 17α-alkylated steroids, the use of metandienone over extended periods of time can result in liver damage without appropriate precautions.

The 17α-methylation of the steroid does allow it to pass through the liver with only a small portion of it broken down (hence causing the aforementioned damage to the liver) allowing it to be effective when taken orally. It also has the effect of decreasing the steroid’s affinity for sex hormone-binding globulin, a protein that deactivates steroid molecules and prevents them from further reactions with the body. As a result, metandienone is significantly more active than an equivalent quantity of testosterone, resulting in rapid growth of muscle tissue. However, the concomitant elevation in estrogen levels – a result of the aromatization of metandienone – results in significant water retention. This gives the appearance of bad gains in mass and strength, which proves to be temporary once the steroid is discontinued and water weight drops. Because of this, it is often used by bodybuilders at the start of a “steroid cycle”, to facilitate rapid strength increases and the appearance of great size, while compounds such as testosterone cypionate or testosterone enanthate with long acting esters build up in the body to an appreciable amount capable of supporting anabolic function on their own.

PRESENTATION : 2 Blister of 25 Tablets each in One Mono Carton with pack Insert.

© Copyright Eminence Labs . All Rights Reserved.
*For the use of only a Registered Medical Practitioner or a Hospital or a Laboratory.
Designed and developed by Sochtek.